Though I am tempted, I will comment no further on this case, as this writer for Christianity Today has done such a thorough job:

This is yet another instance of how the anti-intellectual strand that pervades evangelicalism can hurt the very evangelical witness they want to give.

Evangelism should, first and foremost, be truth-telling.  Once again, academic standards of citation are not, principally, about protecting ownership of original material (that's copyright).  They are about truth-telling: acknowledging when our thinking has been helped by someone else's, acknowledging when we find someone else's way of expressing our thoughts to be more helpful than whatever we could formulate, tipping our hat to our intellectual and spiritual parents.

It's really not that hard to drop a footnote and say, "Hey, isn't it cool how so-and-so said this?"

But an evangelicalism that mocks and derides academia cannot learn from it even those forms of truth-telling that can only help its witness to the truth.
Posted by Sarah Conrad Sours on 12/10/2013 No comments:

Email ThisBlogThis!Share to TwitterShare to FacebookShare to Pinterest
Labels: ethics, in the news, plagiarism

Why You Should Care, or Project Plagiarism Matters

I keep forgetting to show my students stories of why and how academic citation matters "in the real world."

I'm going to start collecting them here, so that I have somewhere easy to point to.

I've spoken before about why I think plagiarism--or, rather, the habits of academic honesty that plagiarism violates--is a big moral deal.

It certainly is a big deal in academia, and the big deal that it is can properly be called a moral deal because the procedural standards are oriented toward properly moral goals--honesty, diligence, courtesy, etc.

Whether it is a big deal, moral or otherwise, outside the academy is worth pondering.  I don't believe that my students believe my insistence on proper attribution does them any good outside of the classroom or has any goal not restricted to the "academic" part of academic integrity.

I came across several examples this week that might be useful for Project Plagiarism Matters.  Just one will have to suffice for this post, however.

I wouldn't have noticed this one but for my colleague at Huntingdon, Dr. Jeremy Lewis, who reminded me that students are protected, as well as imperiled, by proper citation.

When College Students Plagiarize You, You Must Have Said Something Worth Saying

It seems worth reminding students that they might some day write for a living--incidentally to whatever employment they find or as a substantial part of their careers.  They learn proper citation now as part of a system of proper attribution that protects writers from having their work stolen for others' benefit.

This system is especially important for those of us in the essentially charitable enterprise of education.  We accept a modest salary in exchange for bettering the lives of others by passing along ideas that we have learned from others.  There are only a few concrete ways we can augment that modest salary, and almost all of them have to do with generating ideas worth sharing and publishing them in income-producing ways.

But even for those of us outside academia, the protection of our intellectual and artistic work--enacted legally by copyright protection, but morally by accusations of plagiarism--still matters.  My students might not go on to be researchers or authors, but they might go on to be bloggers.  Many of them are already users of content-sharing social media--instagram and such.  They might go on to be technical writers of some kind.  They might be speech writers or website designers or nurse-educators or anybody else who would create something with words.

They might like to know that some fussy old fuddy-duddy of a professor like me is training those who come after them not to plagiarize them.
Posted by Sarah Conrad Sours on 11/08/2013 No comments:

I took this photo several years ago, and I couldn't tell you the name or the location of the church for love or money. 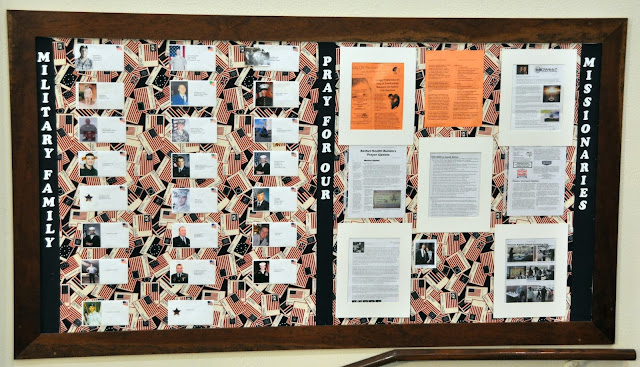 The American church, in virtually all its iterations, assumes the fundamental compatibility of American imperial might and the church's evangelical mission.

If it is a conservative or evangelical church, it will happily pair these two activities on a Prayer Bulletin Board, and will unironically plaster the background with American flags--on both sides of the board.

If it is a progressive or liberal church, it will conscientiously refuse to recognize either of these two activities as worthy of the church's attention, thereby confirming the indissoluble bond between the two.

It is incomprehensible to either kind of church that the Church is called to witness to a gospel that differentiates between belief and unbelief and that places coercive violence on the side of unbelief.  "Pick one," the American church whispers, "and keep busy condemning those who've picked the other."

I stick with the United Methodist Church year after year, disappointment after disappointment, General Conference after General Conference, because I keep hoping that our theological DNA will start expressing itself; that our parents in the faith, John and Charles and Susanna and Phoebe, who refused to bifurcate evangelical witness and social justice, will somehow speak again in the lives of their children.  I keep hoping that Methodists will become disenchanted with respectability and politicking and will once again be methodical--ploddingly, embarrassingly, pragmatically methodical--in their pursuit of personal and social holiness.

I have neglected to make a few important announcements in this space.

I finished the PhD this past April, and graduated May 13th.  My dissertation, "Mapping Suffering: Pain, Illness, and Happiness in the Christian Tradition," is currently available on ProQuest.

I have also accepted a position as Instructor of Religion at Huntingdon College, in Montgomery, Alabama.  I will begin this fall.

This is an exciting new chapter in my life!  Stay tuned . . .